While ancient maze-like symbols have been found the world over the first recorded maze whose purpose was to confound its visitors comes from the Greek myth of the Minotaur and the labyrinth (see Maze Mythology). In the myth the hero Theseus enters the labyrinth, kills the Minotaur and escapes by following out a string he had been unrolling as he traveled.

Many coins and carvings depicting this labyrinth have been recovered. The depiction is virtually identical wherever it has been found, a single pathway with many twists and turns but no branching paths that leads to the exit (this is sometimes referred to as a unicursal maze, while a branching path is referred to as multicursal). This depiction has led historians and maze enthusiasts to refer to a labyrinth as a single twisting path. And has even led some to reinterpret the myth to accommodate this view of the labyrinth.

This conclusion overlooks several pieces of evidence: First, on the island of Crete itself, where the myth originated, the walls of the ancient throne room are covered in a maze pattern of branching paths. Second, the fact that the depictions on coins and carvings are all so similar suggests that it is a symbol, not a map, of the labyrinth. Lastly, and chiefly, the myth itself describes the maze as so incredibly complex that Theseus with his string is  the only person to ever find their way out.

While the people of Crete may have never constructed anything like such a labyrinth, and perhaps not even conceived of a maze design that could confound a visitor, there is no question that those relating the myth imagined the possibility of such as place.

Therefore, the redefinition of labyrinth by some academics is a complete misnomer. This is a case where the common understanding of the word is the most true to its origins. When most people hear “labyrinth” they think something like “super-maze.” While a normal maze is something you trace with a pencil or make in a cornfield, a labyrinth is a fantastical location from which one may never escape.

The single path (unicursal) ”maze” doesn’t fit the common, or classic, definition of a labyrinth or a maze. So what do we call it? I have relegated it to “a maze-like path.” I decided on “maze-like” because the path appears at first glance to be maze, but upon closer inspection it lacks the central elements that defines a classic maze, challenge and choice.

Mazes have essentially five possible purposes: to escape, to get the prize, to trace a path, to be a metaphor, to be a stage.

Escape: By far the most common purpose of a maze is to challenge the visitor to find the means of passing through and escaping. This is true of pencil and paper mazes and most hedge mazes. Most maze tile designs found in cathedrals and churches are actually maze-like paths as described above, which of course have traveling the path and exiting as the goal. The few tile floor which are true mazes have escape as the objective.

Prize: Sometimes the goal isn’t to get out, but to get something that is hidden in the maze, this is often followed by the goal of escaping with the prize. Gathering prizes is the goal of most board games that use a maze as a game board. Many hedge mazes have reaching the center as a goal, usually followed with a easy exit. North American corn mazes often have several locations one must find before exiting in order to “beat the maze.”

Trace: I have not encountered an example of a maze of this type, so I guess I invented it. But it is such an obvious purpose for a maze that I am sure someone must have made a pencil and paper version at some point. The idea is to provide many routes by which the maze can be traversed to the exit, which would make getting to the exit easy. The challenge is to find the path through the maze that outlines a particular shape, such as cross or a face, or perhaps a even a word. The tricky part of creating such a maze is making sure that the multitude of other routes don’t accidentally outline unintended shapes.

Metaphor: Any maze pattern traced on a surface of a church, cathedral, mosque, shrine, or secret society lodge, has a metaphorical purpose along with any other purpose it may serve (usually tracing a route of escape, but sometimes the artist hasn’t even bothered to create a correct path). If the pattern is a maze-like path the metaphorical meaning usually centers around the path of life or enlightenment. Traveling the path is meant to bring a calm assurance that all will be well, either because of God’s care or by achieving detachment from the turmoil of life. If the pattern is a true maze then the metaphorical meaning usually centers around the struggle of traversing the choices of life. The challenge of travelling the path is meant to bring awareness of the difficulty of successfully navigating life. Occasionally both types are used as a general symbol for complexity or secrecy.

Stage: Lastly, sometimes a maze is intended to act as a stage for a larger drama. This is the purpose behind the Minotaur’s labyrinth, to create a setting for the Minotaur to hunt. Many hedge mazes built in England’s Victorian era appear to have been created either as lawn decoration or to provide a secluded locale in an otherwise open landscape. Mazes in movies are likewise often just a backdrop within which the story unfolds.

Putting aside the maze-like path, mazes have four states that determine their primary composition: continuous or non-continuous; simple or overlapping; objective or extra-dimensional; static or dynamic. A choice must be made in regard to each of these bifurcated poles in order for a maze to exist.

Simple or overlapping: A simple maze is any maze the plan of which can be drawn on a single sheet of paper with no overlapping paths. This does not mean the maze itself is two dimensional  The maze may have towers and staircases aplenty but when all these ups and downs are mapped on paper the design can be twisted around until all the paths are flat without any path going over or under another. An overlapping maze is obviously a maze which requires at least one path to go over or under another path and therefore cannot be mapped out on paper without drawing a bridge or a tunnel. An overlapping maze is by definition a non-continuous maze, requiring at least five separate borders to construct. The overlapping maze is, potentially, infinitely more difficult to solve than even a non-continuous simple maze.

Objective or extra-dimensional: An objective maze obeys the laws of classical physics in its design, while an extra-dimensional maze breaks the rules of normal space. Extra-dimensional maze do not exist in reality but there are several examples in fiction such as in the Dr. Who serial, Castrovalva, the Apple II video game Star Maze, and the Escher inspired climax of the movie Labyrinth. The first two of these examples make use of an impossible “forever floor” in which the visitor always returns to where they were no matter which way they travel. The latter example makes use of impossible gravity to contort the maze’s pathways. There are many other ways to warp reality in a maze, here are a few: Time can be warped so that visitors must navigate the modified time stream as well as the physical maze – the recent video game Portal 2 makes impressive use of time shifting as a puzzle element. Direction of travel can be “magically” altered – the Apple II video game The Bard’s Tale included a magical trap that randomly changes the player’s direction of travel without the player’s knowledge, the game also includes the reality shifting element of a teleportation spell and trap. A maze with multi-dimensional aspects can be infinitely more difficult than one without.

Static or dynamic: A static maze is a maze that holds its shape and rules of motion, dynamic maze changes its shape, symbols, or the rules of motion. The most common dynamic maze involve walls which move, such as in the animated movie The Cat Returns (the cats of the cat kingdom wear the walls like a big backpack and secretly move them). An example of a change in motion is a door which is sometimes locks one direction, and other times the opposite direction. An example of a change in symbols is the classic Scooby Doo move of switching the direction of a sign, as happens in the movie Labyrinth (tiny creatures move the tiles with marks on them). In the movie the Wrath of the Titans a maze is depicted which moves on a huge clockwork mechanism, changing the maze and threatening to crush its victims. But perhaps the ultimate dynamic maze is the House from  House of Leaves. The maze within the House changes more and more the deeper you go to, till the maze is so unstable it becomes a void.

Physical: Almost all patterns classified as mazes are physical. This includes not only such large scale mazes as hedge mazes, but also paper and pencil type mazes. A physical maze exists in a form that the medium used to build the maze can be touched. 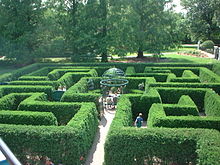 Conceptual: A conceptional maze is a maze which exists as a definite series of links or relationships which have not been illustrated or constructed by the author. This is more than just a person’s mental image of a maze (though that would count as a conceptional maze), it is system which, while it is a true maze, has no physical form apart from the rules which define its existence. For instance, I challenge you to get from Labyrinthos.net to “snow flakes gone wild” in three clicks (yes it is possible). The rules of this game has transformed all the links between several dozen sites into a conceptional maze. The maze has been created not because of the existence of the links, but by the purpose I have attached to them.

Psychological: The psychological maze is a cliche but is a true maze none the less. A person’s psyche becomes a maze when a goal is attached, such as, make the individual laugh, buy something, give something, come to a realization. The person pursuing this goal may be the individual themselves, “How can I stop myself overeating,” or another person, “How do I get him to stop overeating?” but regardless, the goal is achieved by mapping and navigating a path through the person’s psyche. For instance, you forgot your anniversary and you are late getting home from work. You have five minutes to consider what you will say. Your goals: 1. Make your spouse feel as little hurt as possible. 2. Don’t get shouted at. Should you grovel, be upbeat, laugh about it, lie? This kind of maze is highly complex and dynamic (see above) but it goes a long way if the individual in question wants you to succeed. 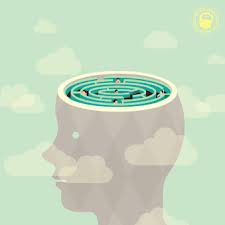 The ultimate maze is a fantasy but the form it would need to take is self evident. It needn’t be large or complex, but instead intelligently dynamic, always allowing the slimmest of possibilities of achieving the goal. If the goal is impossible, it ceases to be a classic maze, but that doesn’t mean reaching the goal needs to be likely…even a one in million chance counts. The ultimate maze is one in which random chance has been minimized and the maze itself is smarter than the visitor, constantly changing the maze to keep the visitor from having any more than a sliver of a chance of achieving the goal. The ultimate maze is the product of the “mind” of a mighty computer or a demon who keeps the carrot dangling seemingly just out of reach.