The concept of the maze has been around for many thousands of years and has appeared in ruins and carvings from every part of the world. So prevalent is the imagery that anthropologists have put plenty of effort into uncovering the aspect of the human experience that gives rise to depictions of the twisting and winding path. Though the jury is still out, there seems to be a somewhat general consensus that these early depictions of mazes were not meant to represent a puzzle to confound but a ritual leading to some form enlightenment.

The first known depiction of a maze whose purpose is to confound comes from the myth of the Labyrinth. Below is a summary of the myth with some supporting material. Most of this is from memory (I read a lot of mythology as a kid) so please pardon any inaccuracies.

The Minotaur and the Labyrinth:

Zeus slept with a lot of human women, something which understandably ticked off his wife Hera. In one encounter he lured a princess to a cave by taking the form of a bull. (Apparently she enjoyed following stray cattle.) Zeus revealed himself and they did the deed. The princess became pregnant and so Zeus arranged for her to become the wife of the King of Crete. She gave birth to three sons, one of which was Minos.

When the king died the sons ruled together for a while but Minos decided he wanted it all and so he banished his brothers and took the throne. Minos, being a son of Zeus, was favored by the gods, they even gave him a demigod wife, the daughter of Helios, the sun god.

In order to validate his power grab and show off how tight was with the gods, Minos prayed to Poseidon for a bull from the sea for him to sacrifice. Poseidon sent a pure white bull of amazing beauty. This is the point where Minos did something truly stupid, setting into motion a series of event that would lead to two wars and the death of almost everyone involved: Minos kept the bull and sacrificed an ordinary one instead.

Poseidon is furious and cursed the bull so that it ran wild destroying crops, no one could subdue it. Then, to add insult to injury, Aphrodite cursed Minos’ wife so that she lusted after the bull. This would have been the sad end of this tale if not for Daedalus, who made it much worse.

Daedalus was a son of the King of Athens (I think) and was the greatest inventor/sculptor/builder of his time. However, this was only true because when Daedalus saw that his nephew might become greater than himself, he threw him off a tower. For this murderous deed Daedalus was exiled from Athens. He sailed to Crete. In Crete they welcomed him with open arms because he was famous and his dead nephew wasn’t.

Daedalus worked for King Minos and built him a grand palace. There Daedalus married and had a son named Icarus. Daedalus could solve almost any problem, and so Minos’ wife asked Daedalus to help her mate with the bull. Daedalus, who apparently would help anyone with anything, built a wooden cow that she could hide in to trick the bull into mating with her. Daedalus must have made a thoroughly convincing cow suit because the bull does the deed which has the fortunate effect of breaking the lust-curse on Minos’ wife.

Meanwhile, the hero Hercules has been doing tasks as penance for killing his kids while he was temporarily insane because of Hera. (Hera is kind of passive aggressive, instead of confronting Zeus about his philandering  she just makes his mistresses’ and illegitimate children’s lives hell.) Hercules, on his seventh task, stopped by Crete to capture the raging white bull and succeeded in doing so. He took it back to Athens where it was released it into the wild. 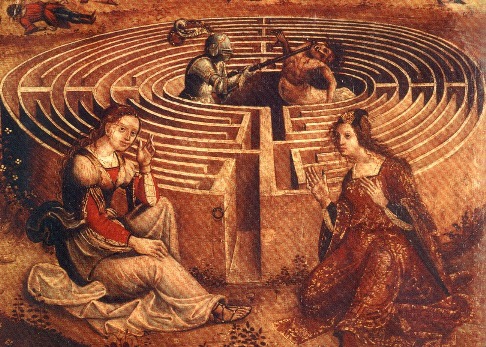 Of course, Minos’ wife got pregnant and gave birth to a baby with the body of a man but the head and tail of a bull. After the baby is weaned it ran wild and began to consume the only solid food it would eat, human flesh. In a classic case of caving to a strong willed child, King Minos had Daedalus make the Labyrinth to house the child. The creature came to be known as the “Bull of Minos,” the “Minotaur.” The Labyrinth was an impossibly complex maze of twisting passageways built under the royal palace. It purpose was not to be a prison for the Minotaur but a home for it. The reason it was a maze was to trap live human sacrifices for the Minotaur to eat; it was a hunting ground that gave the Minotaur an unbeatable advantage… volunteers were scarce.

Luckily, one of Minos’ sons was murdered. He had gone off to the athletic games in Athens and had won every sport. This ticked off the Athenians so much that they had him killed by the white bull. When King Minos heard about this he sailed to Athens with a fleet and sacked the city. As part of the unconditional surrender package which they are forced to accept, the Athenians had to send a tribute of seven boys and seven girls to Crete every nine years to be sent into the Labyrinth for the Minotaur to eat.

Theseus, a son of the King of Athens, wanted Athens to be free of Crete. First Theseus tracked down the white bull, captured it, and sacrificed it Zeus. Then he volunteered to be tribute in order kill the Minotaur. What he didn’t know was that the Labyrinth was so impossibly complicated that it was more deadly than the Minotaur.

Fortunately King Minos’ daughter fell in love with Theseus as soon as she saw him. She gave him a sword and asked Daedalus for help. Daedalus, continuing his role as tech support, gave Theseus a ball of string and instructed him to unwind it as he traveled through the Labyrinth so that he could follow the string out again. (Incidentally, as a result of this story the Latin word for “ball of string” is the origin of the English word “clue.”) Theseus killed the Minotaur and eloped with Minos’ daughter. Alas, Theseus then learned that his new girl was already married… and so he killed her.

Unfortunately for Daedalus, King Minos had figured out that Daedalus “helped” his daughter and Theseus and has him and his son Icarus imprisoned in a tower in the Labyrinth. To escape, Daedalus made wings for him and his son out of feathers and wax. The plan worked except that his son Icarus got caught up in the thrill of it, flies to high and melts his wings. Icarus died crashing into the ocean. Daedalus flied on to safety and went into hiding.

Meanwhile, Hercules was on the eleventh of his ten tasks (he received two penalty flags, so he was in overtime). He needed to steal golden apples from the daughters of the titan/god Atlas. Atlas sided against the Olympian gods in the Olympian/Titan war. The Titans lost and so Atlas was cursed to forever hold the earth and the sky apart so they wouldn’t have any more children. Anyhoo, Hercules bumped into Atlas who agreed to get the apples for Hercules while Hercules held up the sky for a bit. When Atlas got back he tried to trick Hercules into holding up the sky forever, but Hercules counter-tricked him and escaped with the apples.

Elsewhere, Theseus’ best friend decided to abduct the wife of Hades, so Theseus and his pal went to the Underworld to nab her and wound up imprisoned. Hercules, on his twelfth and (for the third time) last task, went to the Underworld to bring back Cerberus the three headed dog that guarded the gates to the Underworld. Hades agreed to let Hercules borrow Cerberus for a bit provided he could subdue him bare handed and that he didn’t harm the creature. He succeeded. Hades also let Theseus go free, at Hercules’ request, but not Theseus’ friend since he was plotting to take Hades’ wife.

Theseus, upon returning to Athens, found himself no longer welcome. He fled to a small island where the ruling king tossed him off a cliff to his death in order to prevent Theseus from replacing him.

Hercules headed home having completed the twelve tasks and married a nice girl. On the way home a centaur ferried them one at a time across a river. While taking Hercules’ wife across the centaur tried to rape her. Hercules killed him with an arrow poisoned with hydra blood. As the centaur died he convinced the girl that his blood is a love potion and urged her to save some of it, which (being gullible) she did. Later, when it appeared Hercules’ love for her was waning  she put the blood on Hercules’ cloak. The centaur blood was laced with the Hydra’s poisonous blood from the arrow, and it burned Hercules badly. Hercules was so tough he didn’t die, but he suffered continually. Eventually he built a pyre, laid down on it, and had a friend light him on fire.

King Minos, determined to find Daedalus and kill him, traveled the world in disguise offering a prize to anyone who could string a thread through a spiral shell. Daedalus achieved this by tying one end to an ant. When Minos heard someone had solved the riddle he approached the king of that country and demanded Daedalus be handed over. The king agreed and invited him to stay over. Then the king’s daughters boiled King Minos to death while he was taking a bath.

The gods favor Minos in death by giving him the role of judge of the dead along with his brothers. Picking up on this, the poet Virgil (70 – 16 B.C.E.) in his book “Aeneid” depicts Minos as judge of the dead, deciding whether a soul should ascend to the heavens or descend to the Underworld.

The poet Dante (1265–1321 C.E.) in his book “Inferno” includes both the Minotaur and King Minos in his depiction of hell. The Minotaur, mentioned briefly, is the guardian of the circle of violence. Minos is the judge of the damned, deciding to what circle each soul must descend. 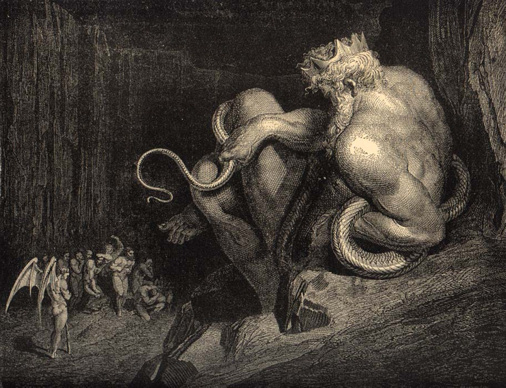