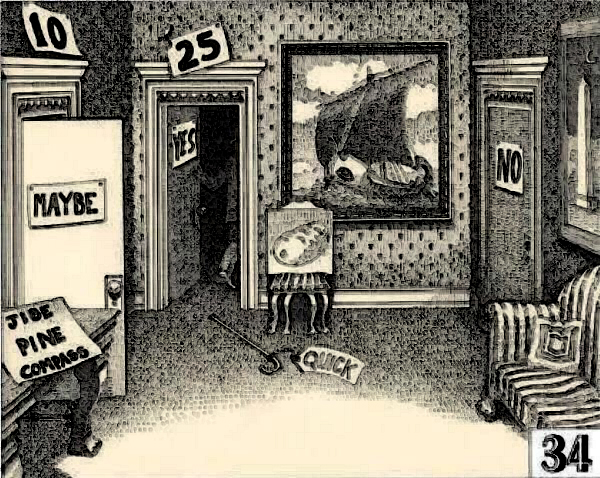 …a middle-class drawing room or parlor. It was amazing how much more comfortable they felt in these surroundings.

Everyone sat down, some on the floor, and chatted about where they had been and where they should go.

“Magpies!” I said to myself. “Not a real thought in their heads.”

They were so much at ease they almost missed what the room was telling them altogether. They finally got the message, which I thought was pretty obvious, and we went on to…

● On the sign “JIBE PINE COMPASS” all point to the word “needle.” A jibe (not the boating term) is an insulting quip, which is sometimes called a needle. A pine tree has needles, as do compasses. There are three things with eyes — a needle, a potato, the ship in the painting. [Credit: Owen Hammer / Jimmy Williams] The picture on the right is not the Washington Monument but an obelisk known as Cleopatra’s Needle. [Credit: Naomi Alderman] The needle represents the number one while the eye represents a zero. “Needle”&”Eye”=10 the number of the correct door. [Independent Credit: David Gentile | White Raven] Needles have eyes thus every needle reference can be seen as both a 1 and a 0, [Credit: vewatkin]

● The ship in the painting is sailing toward Door 10, the correct door, indicating that we travel in that direction. [Independent Credit: SP | White Raven] The phrase, “…and chatted about where they had been and where they should go.” Is a reference to the ship travelling from the direction of the unmarked door (where they had been) to Door 10 (where they should go). [Independent Credit: vewatkin | White Raven]

● The walking cane labeled “QUICK” which is pointing at door 25 is a hurry-cane/”hurricane” [Credit: Owen Hammer] this warns against entering door 25. [Independent Credit: SP | White Raven] This solution is reinforced by the sailing ship solution above. [Independent Credit: Aria | White Raven] This may also be reinforced by the night scene picture being behind the stern of the ship, cloudy in the picture of the ship, with light ahead. [Credit: SP]

● The downward arrows on the wallpaper and reference in the text to “Everyone sat down, some on the floor…” directs our attention to the floor. There are 10 visible feet on the furniture, indicating door 10. [Credit: vewatkin] The foot of the man leaving draws our attention to the feet of the furniture – this hints that we should “follow the feet.” The chair (in the center) has 8 feet, the furniture on the left or right has one foot each, 8+1+1=10. [Credit: White Raven]

● The stripes on the couch pair with the squares on the pillow to create an approximation of a 10. The line of the monument pairs with the circle of the moon to make a 10. [Independent Credit: David G | White Raven] The line of the mast pairs with the circle of the eye on the ship to make a 10. [Credit: White Raven] The ship’s “mast” is actually a glowing white rope making the 1 more evident. [Credit: vewatkin]

● The lines in the chair pair with the eyes in the potato to make an approximation of 10. [Credit: vewatkin]

● In the text is the word “felt” which is an anagram for “left.” In this room as well as the other two rooms in which the word “felt” occurs (11, 25) the correct door is the the left door. [Credit: Hidden Mystery / Beelzebibble]

● The text reads, “”Magpies!” I said to myself. “Not a real thought in their heads.”" “Magpies” is a reference to the fortune telling device from the 1700s turned nursery rhyme commonly referred to as “One For Sorrow.” [Independent Credit: Aria | White Raven]
The line, “Not a real thought in their heads.” may be a reference to the superstitious nature of the rhyme. A popular version of the rhyme reads…
“One for sorrow
Two for mirth
Three for a wedding
Four for a birth
Five for silver
Six for gold
Seven for a secret not to be told
Eight for a wish
Nine for a kiss
Ten for a bird you must not miss”
The last line refers to not missing a golden opportunity, in this case the correct door, 10. [Credit: White Raven] 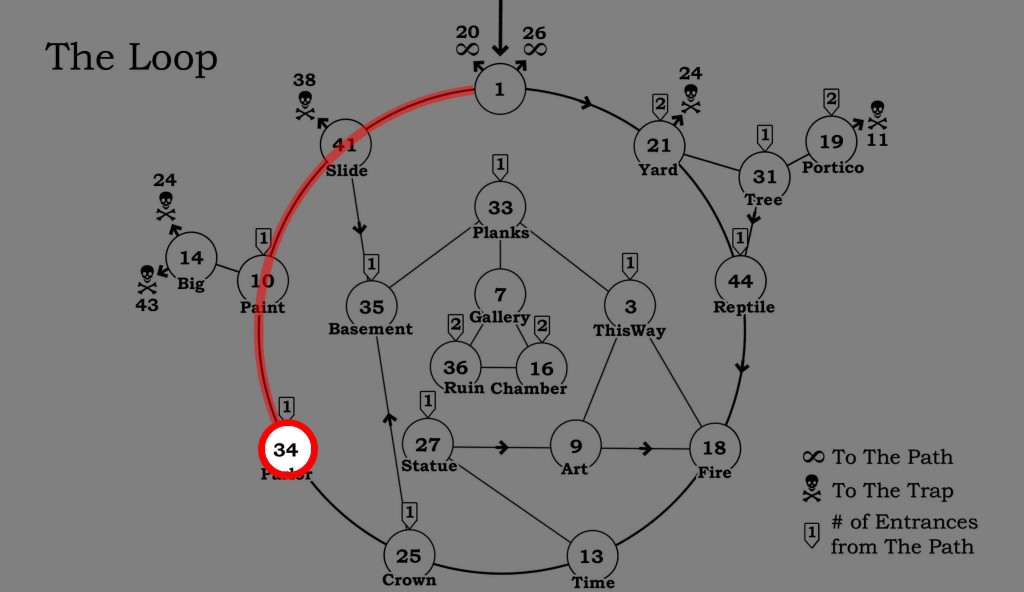