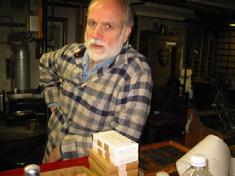 Christopher Manson is a children’s book author and illustrator noted for his use of traditional hand tools to painstakingly make the pine woodcuts that fill his several highly acclaimed works.

Born in Buffalo, New York, Manson graduated in 1975 from the Nova Scotia College of Art and Design in Halifax, Nova Scotia, having specialized in printmaking. He also obtained a Master of Fine Arts from the State University of New York at New Paltz.

He returned to Buffalo, where he took a job at a local arts council in arts management, a position that required fundraising skills. “It wasn’t for me,” he later recalled. “I figured out that I was tired of helping others make their art.”

After illustrating a friend’s cookbook, he published the phenomenally popular children’s book, MAZE: Solve the World’s Most Challenging Puzzle (1985), issued by the major publishing house Henry Holt and Company. The book promised a $10,000 award to whoever solved the book’s many visual puzzles, and even though the contest has long since ended, the book remains in print.

Manson summed up his approach to his authoring and illustrating children’s books like so: “What I’m really after is the perfect book. The kind where you just can’t imagine the words without the pictures, or the pictures without the words . . . like A. A. Milne. But there aren’t that many out there to point to as perfect. I’m constantly working toward it.” He added, “Even if I won the 40 million dollar lottery, I’d still do this — I’d have a fancier studio, but I’d still do this.”