The Story of MAZE: Solve the World’s Most Challenging Puzzle

Written by White Raven with information provided by Christopher Manson

One more cup of coffee…

It was 1984 and Christopher Manson was up late, 2 AM, scribbling and thinking. Recovering from Saturday night he was downing cups of coffee and wracking his brain for a book idea.

Manson had just finished illustrating a cookbook for a friend of his. At the meeting with the publisher he asked about possible work opportunities. The publisher had none and instead urged Manson to come up with a book idea and pitch it to him. Manson was living day to day out of a small apartment, and his bank account was near zero. And so he was up at 2 AM with nothing to show for it.

He decided to call it night but then changed his mind, “Just one more cup of coffee.” And one more cup was all it took. Over the next 45 minutes MAZE was born, the ideas tumbling out onto paper.

Where the inspiration came from, Manson says, is a thing of mystery, bits borrowed from countless sources and experiences. None the less, he was able to highlight a few specific influences. Most obvious is Manson’s interest in architecture, as displayed in the wide variety of architectural styles represented in the rooms.  Manson’s love of classic science fiction, Jules Verne’s “Mysterious Island” in particular, informed the tone and general sense of wonder and disquiet. While Manson’s appetite for alchemic illustrations, forgotten books and obscure writings, supplied much of the puzzle content. 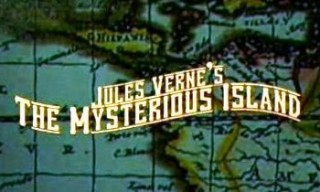 Over the next 9 months Manson lived off of the advance and churned out the work. After working out the main puzzle he focused on building hints and false leads. He rarely left his apartment. Day after day, he drew the painstakingly detailed inked illustrations from morning to night. The mail piled up. His hands ached and began to cramp. Toward the end he was soaking his hands in warm water several times a day to ward off cramping.

Manson did not make the book with a contest in mind, the prize was the publisher’s idea, as was the cover style and title. A law firm was hired by the publisher to manage the contest. Manson wanted to call it “Labyrinth” but the publisher objected due to the Jim Henson movie by that name released just months before.

Manson was unaware of the deep cord that the book struck with people in America and Britain, and the frenzy surrounding the contest. He was, however, relieved to finally have an income.

Manson had intended MAZE to be extremely difficult, but still he was surprised when the deadline came and went with no one even close to a solution. The deadline was extended and clues to the puzzle in room 45 were released by the publisher. Then the next deadline came around still no one had the solution. In the end the prize money was divided between the 10 people determined to be the closest. All ten had significant portions of the solution worked out, but no one had a winning keyword.

Among other things, Manson does book restoration the Library of Congress, he lives neck deep in rare and obscure books. He is a master of pen and paper, wood block and printing press, historical ephemera and long forgotten lore. As such, his contact with computers is rather limited but he knew a little about the computer game.

In 1994 Interplay released a colorized version of MAZE with hyperlinks leading from room to room. Manson was invited to meet with the game developer, who was dealing with a serious back injury and had trouble focusing. Afterwards Manson was given a CD with the game on it and was impressed with the result, but the last Manson had heard the game idea has been dropped…he was surprised to learn that it had been produced and sold as “Riddle of the Maze” for Macintosh. 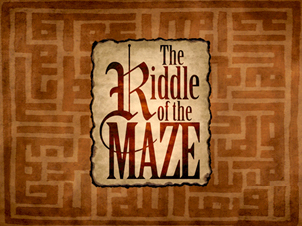 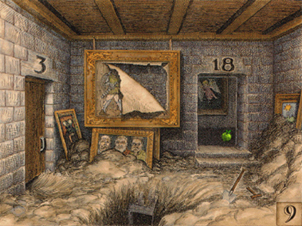 Another computer graphics version of the book began to be produced but was dropped before completion. Manson was not aware of this version and perhaps was not ever told of it since development does not appear to have gotten very far past conception. The images of this version are striking on account of the extreme lighting effects and the fact that they are only loosely based on Manson’s drawings. It is probably fortunate that this version was not produced since the content of the rooms is very altered, destroying the dearth of puzzles scattered throughout MAZE. 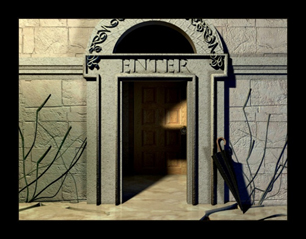 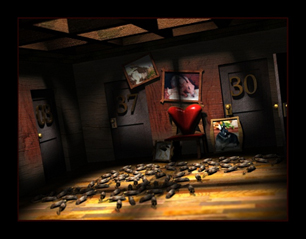 The Henry Holt was originally interested in a sequel. Manson showed them drawings of rooms and plans for a 100 room labyrinth. Despite considerable enthusiasm from fans – many saying it was their favorite book ever – Henry Holt backed away. “They were going through a reorganization, they were distracted,” Manson recalled, “I feel I should have pushed harder.”

In 1999 the computer game MYST became the top selling video game in history. The developers of the game reference Jules Verne’s “Mysterious Island” as the source of their inspiration, (the same book which inspired MAZE) but for obvious reasons a great many MYST and MAZE fans suspect that MAZE was a central source of inspiration as well.

In the words of one fan, “More important than its puzzle, however, is the book’s legacy. Without a doubt, the book left a lasting inspiration to many, stoking a hunger to try solving more baroque and beautiful puzzles, even if that means having to create them first. You can see echoes of Maze in art-heavy digital adventures such as Myst.” – Jason McIntosh from his blog entry “Maze: beautiful, inspirational, unsolvable.”

Another more recent child of MAZE is the acclaimed 2000 bestseller “House of Leaves” by Mark Z. Danielewski. The book stars a person falling into madness from reading a book about a movie about a shape shifting maze within a house, and the people stupid enough to venture inside.

With the rise of computer gaming, MAZE went out of print briefly, but growing interest (especially evident in internet chat rooms) brought the book back. Praise from sites all over internet attest to the book’s enduring power:

“My GODS people, this book is insane. I’ve owned it for two years now. Why haven’t I gotten around to writing a review yet? BECAUSE I’VE BEEN WORKING ON IT THIS WHOLE TIME. MADNESS!!!!!” – Jesse Nelson

“Good grief. This book will be the death of me. I found it years ago, still haven’t solved it, and sometimes it feels like the book isn’t even real – like I spookily stumbled across the only copy that changes as I am reading it. I have never even seen this book anywhere except for the one store I bought it from. I’m pretty sure Manson is the devil, or God, for creating a book this crazy. Good luck to you if you decide to journey down this path to madness!”- Laura

“This work is an engrossing, intriguing, thought-provoking, perspective-changing, paradigm-shifting…maze. This is a work of genius.” – J.J. Kilroy

“As you travel through the mansion, you suddenly notice funny things – the labyrinth seems to be turning in on itself. “Haven’t I been here before?” You are lost! Trapped! Muahahahaa!!!!”

“It all starts making sense at about 3 AM amidst frantically drawn loopy maps, fragments of rebuses and the fact that there’s just something *wrong* with the stick figure in the basement. That’s when you stare blearily at the page and say, “We’ve been blind, we’ve been blind the whole time,” and start babbling conspiracy theories.” – M. Glenn

“The most engrossing book ever.” – Lily D.

Manson has agreed to make available a drawing from his incomplete sequel to MAZE and he appears at least somewhat open to a sequel. To quote, “There are many things I wish I could have put into MAZE that would have added even more depth. For this reason I have never let go of the idea of a sequel. Your site suggests to me there are people out there that would welcome a sequel. If there is interest, I may pick it up again.”

Let us hope he does!