In the movie MirrorMask by Jim Henson and company, the heroine is aided in her quest to escape the mirror-world by the “Really Useful Book.” This intelligent book senses your needs and tell you (in a somewhat cryptic form) what you need to know, when you need to know it. A really useful book indeed. 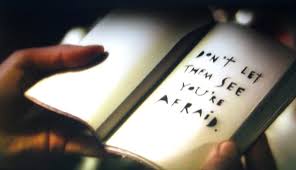 In several of H.P. Lovecraft’s short stories he makes reference to the “Necronomicon” by Adbul Alhazred. The Necronomicon was written in by Alhazred in 738 A.D. It contains secret and dangerous mystical knowledge. Those who attempt to grasp its powers tend to die mysteriously.

The Eye of the Gargoyle:

In a short story by Nelson Slade Bond, “The Bookshop,” a writer wanders into a bookshop that sells books that were never written. These books are perfect concepts by their respective authors who had not put them in writing. One of the several titles listed is “The Eye of the Gargoyle” a never written book by Edger Allen Poe.

The Theory and Practice of Oligarchical Collectivism:

George Orwell, in his classic novel “1984″ features a secret book. The book described the methods by which the ruling class (big brother) held on to power and how to overthrow them. The book was known simply as “the book.” When the main character actually gets his hands on this secret book it is labeled, “The Theory and Practice of Oligarchical Collectivism”, by Emmanuel Goldstein. 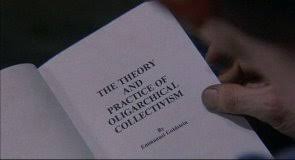 The Elder Scrolls series of video games by Bethesda Softworks has as a reoccurring theme ancient magical scrolls known as “elder scrolls.” Elder scrolls are fragments of creation, existing since the creation of the Elder Scroll world. The scrolls contain secret and powerful knowledge but cannot be read without years of meditation and training. Those who attempt to read the scrolls without preparation wind up blind or mad. 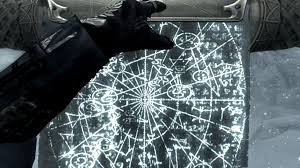 The Book of the Black:

In the DC Comics universe, The Book of the Black is a powerful object filled with black energy and able to predict future events. The black lanterns (enemies of the green lanterns) attempt to use the powers of the book to destroy the universe. 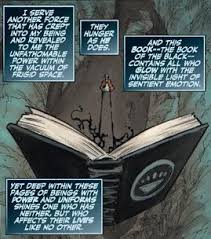 The book House of Leaves revolves around the manuscript for another book, The Navison Record, though “manuscript” may be to generous a word. The Navidon record is actually a trunk full of pages and scraps, some typed, some handwritten, some with stains, intentionally inked out pages or with carefully burned parts. Johnny Truant struggles with his sanity as he becomes obsessed with reading and arranging the chaotic pile. And attempting to understand the chaotic, reality bending story within. 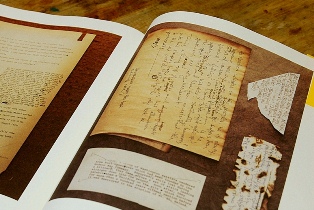 In the Voyage of the Dawn Treader by C. S. Lewis, Lucy is persuaded to read a spell from a magician’s spell book to lift a “curse.” Once the book is open she is confronted with the temptation of casting a variety of powerful spells. She resists the temptation to cast a spell to make her beautiful when an image of Aslan, the good and powerful lion, appears in the book. She then falls into the temptation to cast a spell which allows her to see what a friend says behind her back, she immediately regrets that act. The next spell is actually a magical story which cannot be remembered or reread but lifts the spirit of the reader. Finally she finds the spell to make the unseen, seen, and breaks the “curse.”

In “The Club Dumas,” the 1993 book by Arturo Perez-Reverte, rare book dealer Lucas Corzo is hired to go in search of the three copies of a book written by Aristide Torchia in 1666, The Nine Gates To The Kingdom Of Shadows. The books contain nine etchings each which comprise a multi-part “find the difference” puzzle in which the odd one of the three images is correct. Arranging the correct etchings in the correct order unleashes a terrible secret. 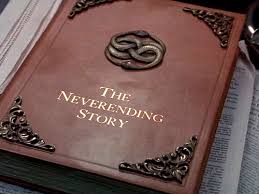 In the movie “Indiana Jones and the Last Crusade” the search for the holy grail concludes in a desert tomb. To retrieve the grail Indiana Jones must get past three deadly traps. His father, who has been researching the grail for ages, has a notebook with clues to getting past the traps. Much of the plot of the movie revolves around possessing this notebook filled with his father’s obsessive scribbling.

In the movie “Harry Potter and the Chamber of Secrets” Harry Potter and friends interact with a diary found in the library. When the owner writes in the diary and diary writes a response back. Eventually it is discovered that the book is evil, containing a sliver of the consciousness of the dark lord Voldemort, who, before becoming the dark lord, was named “Tom Riddle.” The Octovo is the most powerful magical item in Terry Pratchett’s Discworld as described in “The Colour of Magic” and “The Light Fantastic.” The Octovo is a magical tome containing eight spells. As the story goes, the Octovo “loses” a spell and goes temporarily insane, necessitating chaining the book down as it shakes and howls.

The Scrolls of Uncertain Providence:

The Scrolls of Uncertain Providence are a magical artifact consisting of a bundle of pages tied together as described in the Dungeons and Dragons Magic Item Compendium. The scrolls contain the ravings of a madman obsessed with death. Reading the scrolls can temporarily protect an individual from death but can also drive the reader insane.

Drowsy’s Recollections of Nothing. 3 vols:

In 1851 Charles Dickens was moving to a new house and instructed a bookbinder to make some fake books that he could use to populate his library. Why he wanted to do this is uncertain but from the entertaining titles, surely humor was one of the reasons. Of these titles my favorite is “Drowsy’s Recollections of Nothing. 3 vols.”