“This is not really a book. This is a building in the shape of a book…a Maze. Each numbered page depicts a room in the maze.” “Test your wits against mine. I guarantee that my maze will challenge you to think in ways you’ve never thought before. But beware…one wrong turn and you may never escape!” 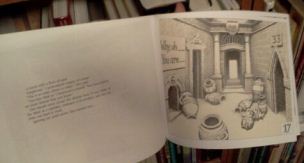 MAZE contains an astonishing number of puzzles, more than 116. Of these 116+ puzzles the solution for only 21 are presently available online. I say we change that…

Welcome to the conversation.