CUBE is a low budget science fiction thriller/horror flick of surprising depth. The plot is purposely thin – in fact the lack of a plot is central to the plot. Several people wake up in cube shaped rooms with no memory of how they got there. The rooms are connected to one another via hatches (including up and down hatches); many of the hatches and rooms have lethal traps in them. A group of survivors band together to try to escape by travelling from room to room avoiding traps. Since the cube appears to be just a machine and their captors are unknown, the only villains in the movie are the victims who fight amongst themselves.

The CUBE is a simple maze in the shape of a huge cube made up of cube shaped rooms. There is one exit, placed in the center of one of the sides. Solving this maze would be easy if the victims knew the big picture of the maze, but without the big picture there is no rationale for heading in any particular direction. The combination of lack of information, freedom of movement, and the fear of movement makes solving this maze daunting.

[Content Warning: CUBE may be more of a science fiction psychological thriller than a horror movie but it does contains some instances of horror movie-like gore.] 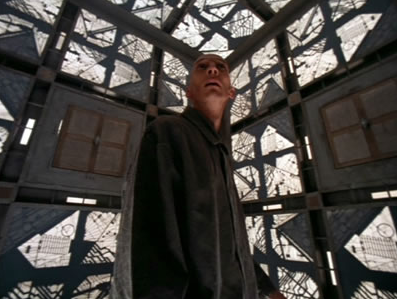