The original Dungeons & Dragons paper and pencil role playing game (1974) has probably produced more fantasy maps and mazes than all other sources combined. It is very likely that Dungeons & Dragons is responsible for well over half of the hand-drawn maps ever produced.

It is estimated that 20 million people have played Dungeons & Dragons. If the average length of interaction with the game was a year (averaging people who dropped out immediate with those still play it today). And if the average scenario lasts two weeks and requires, on average, three maps, two of which are maze-like. Then the players of Dungeons & Dragons have produced over one and a half billion hand-drawn maps, over a billion of which are mazes or near-mazes… and this is a low estimate. 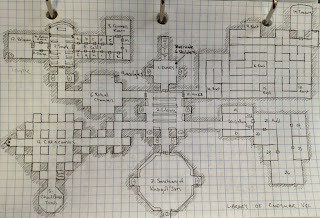 One of over a billion imaginative and unique hand-drawn mazes.