Each of Mr. Manson’s puzzle books creates a new genre of puzzles and The Rails I Tote is no different. Each of the 45 puzzles in Rails I Tote has a wildly imaginative story on one page and a beautiful illustration on the facing page.

“Each of the pictures in this book illustrates two things, one being, of course, the tale that accompanies it. The other, hidden subject of he picture is a simple word game called a Spoonerism.

A Spoonerism results when the initial sounds of any two words are transposed, resulting in two different words. The “Parched Stork” becomes “Starched Pork”; everyone’s favorite “Peas and Carrots,” is transformed into “Keys and Parrots”; and “Legal Beverage” is changed into “Beagle Leverage.”

Even though this is the lightest of Manson’s puzzle books in terms of difficulty, it is none the less a considerable challenge. The spoonerisms are not only well hidden, but are entertainingly hidden. Manson manages to connect such disperse ideas as “eating breakfast” and “an eel infested castle moat” in a single puzzle. Despite the wild imagery and surreal stories, you will over and over say to yourself, why didn’t see that before! 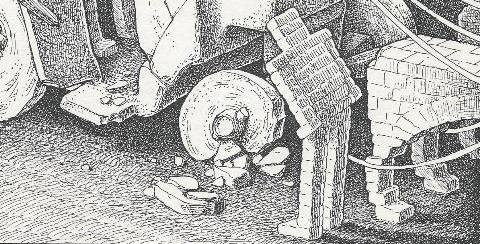 The Rails I Tote is out of print but used copies can be purchased here:

5 thoughts on “The Rails I Tote”