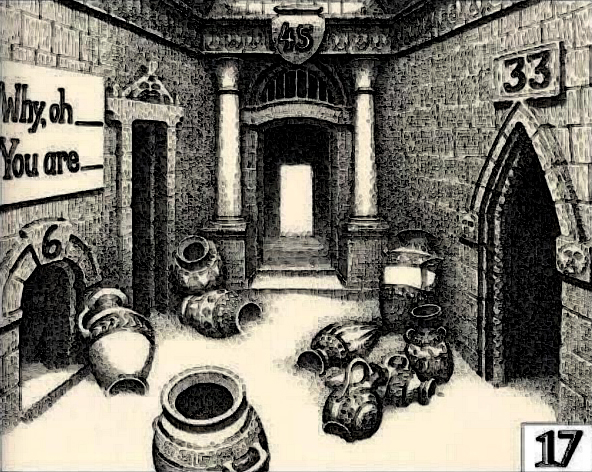 …a room with a floor of sand.

“Amphorae,” I pronounced; empty, of course.

“This is an easier choice to make,” they said.

“You may think so,” I muttered to myself, “but your choices are more limited than you know.”

One should never accept the obvious here. If you think of the Maze as a machine, confusion is its product, and the machine was hard at work.

Ignoring my good advice they hurried into…

● The part of the Riddle of the Path in this room is “your” – derived from the sign elements “Why, oh ___ You are ___” = “y – o – u – r.”  [Credit: Unknown - prior to 1990.] The Guide’s comment, “”Amphorae,” I pronounced; empty, of course” may be a clue that we are to pronounce why-oh-you-are as “your” while ignoring the blanks… “empty of course.” [Credit: White Raven] In response to the visitor’s confidence the Guide retorts, “…your choices are more limited than you know,” in reference to the ”Why, oh ___ You are ___” puzzle this suggests that we are not supposed to choose words to fill in the gaps. Likewise, the Guide’s internal dialogue, “One should never accept the obvious here,” and “Ignoring my good advice…” suggests that the obvious approach of filling in the gaps is incorrect. [Credit: Vewatkin]

● On the top border of the room there are visible arrows pointing up on the wall with door 45 in it, indicating that we take that door.  [Credit: Hello Gregor]

● The arrows on the piece of pottery next to Door 6 point away from this door.  [Independent Credit: The Electric Labyrinth Love Luau | White Raven] There are arrows on pottery pointing away from the locked door and Door 33 as well. [Independent Credit: Vewatkin | White Raven] [See Related Images] There also appears to be a visual cascade caused by images on the pottery and other visual cues that lead like trails to Door 45. [Credit: White Raven] [See Related Images] 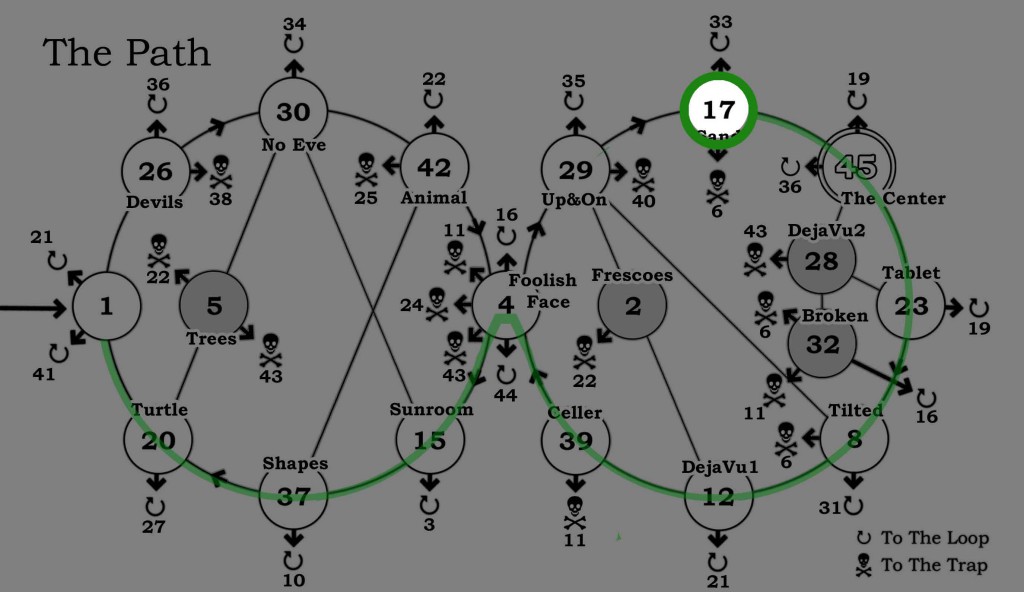