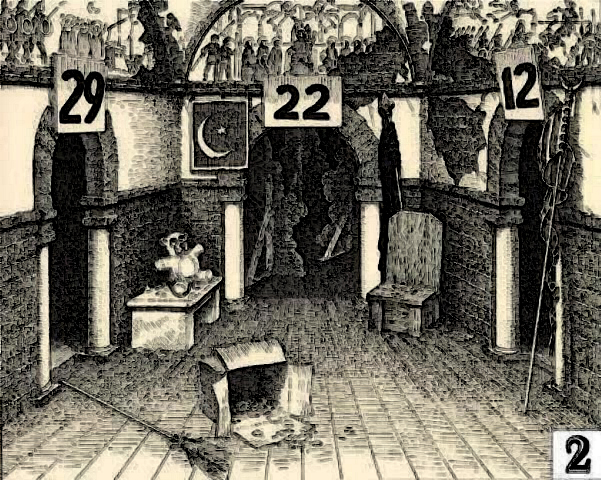 …a bright room whose walls were in some disrepair. The floorboards creaked and groaned; the plaster made a gritty sound.

They studied the old frescoes for clues but missed the obvious signs.

“Are we on the right path?” they asked.

Keeping in mind what a relative term “right” is, I assured them they were, indeed, on the right path. As for the “correct” path or the “most appropriate” path…. Well, that might be something else.

Full of confidence now they marched out to…

● The spear and staff war banners both point towards the Frescos and stand next to doors 12 & 22. The humble broom points to 29 – which is the correct door. [Independent Credit: Hello Gregor | White Raven]

● The text reads, “”Are we on the right path?” they asked. Keeping in mind what a relative term “right” is, I assured them they were, indeed, on the right path. As for the “correct” path or the “most appropriate” path…. Well, that might be something else.” The reference to right being relative draws attention to the bear, the door to the bear’s right, which the bear’s right arm is pointing at, is the “right” (as in “correct”) door. [Independent Credit: Aria | White Raven] The bear combined with the to-the-right riddle gives us “bear right” (from the point of view of the bear) as a way of phrasing the solution. [Credit: Dave G] The bear is looking upward at a ship/boat in the mural, suggesting travel, or more simply, “go.” This connection is reinforced by the accumulation of items in the room starting with the letter “B” (bench, box, banner, backdrop, bear) which helps us find the Boat. (See solution at bottom for a possible addition to this solution.) [Independent Credit: Vewatkin | White Raven]

● The first words of the text are “…a bright room…” “bright room” is a spoonerism of “right broom” the broom is both pointing at the right (as in correct) door and is also to the bear’s right (as described in the solution above). [Credit: SP]

The History of Constantinople Solution: The left panel represents the city when it was called Byzantium by illustrating a significant event from that time period, the saving of the city by the appearance of a bright light or moon summoned by the three-person-in-one goddess Hecate. The center panel with its Byzantine style art represents Constantinople. The right panel represents the fall of Constantinople and therefore the transition to the city being named Istanbul. So the panels represent Byzantium, Constantinople, and Istanbul respectively. “Byzantine” panel is the end of the trail of “B”s (see solution above) and is therefore the correct choice. [Credit: Aria] 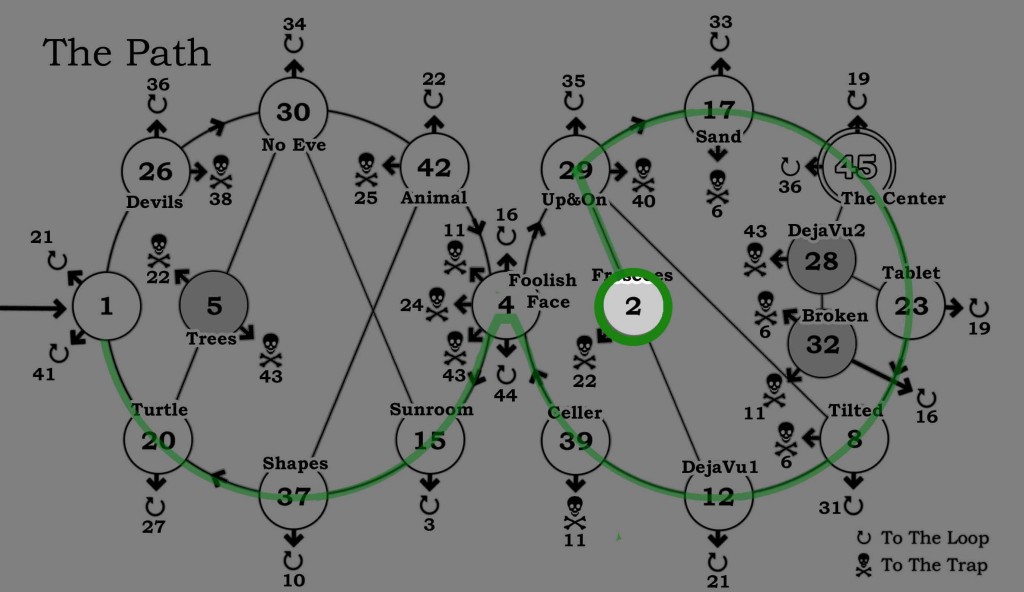