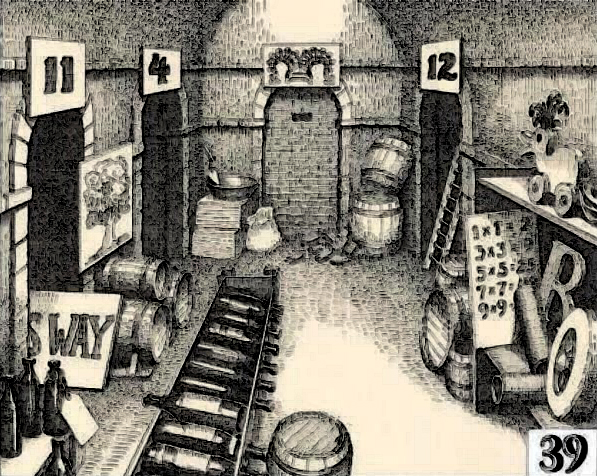 …what looked like a combination wine cellar and junk room. Someone had been working here as well.

“This is more to my taste,” said one, dusting off some labels. All the bottles turned out to be empty.

“I hear someone hammering,” said one.

“No, that’s a chopping sound,” said another.

None of them heard the faint jingling that came from behind the wall. “I don’t hear anything,” I said loudly and, with as much commotion as possible, hurried them out of the room to…

● The jingling, the jingle hat, and the bricked up wall all point to Edger Allen Poe’s famous short story, “The Cask of Amontillado.” [Credit: Ian Finley] In the story a man, Montresor, guides another man, Fortunato, who is tipsy, into a deep winding cellar to show him some wine, and then traps him there by shackling him in a small room and bricking over the door. The trowel points to the correct door (indicating the door Montresor left by) while a tilted wine barrel leans toward one incorrect door and a wine bottle points to the other incorrect door (poor Fortunato is both tipsy and lured to his doom by wine). [Independent Credit: Wanderer/David G/Vewatkin | White Raven]

● In “The Cask of Amontillado,” the number of tiers of bricks (eleven) used to brick up (trap) Fortunato is emphasized for dramatic effect. This suggests we avoid door 11 which leads to the trap. [Independent Credit: Aria | White Raven] While the hour of Fortunato’s entombment (midnight) is meant to dissuade us from door 12. [Credit: Aria] Midnight is the time the last brick is laid which is the moment captured in the image of this room via the missing brick.

● The sign which appears to say “THIS WAY” with the “THI” cut off in fact says “SWAY”. This is a reference to Fortunto’s drunken state as emphasized in the description of Fortunato at the beginning of the story, “The gait of my friend was unsteady, and the bells upon his cap jingled as he strode.” We should avoid the door marked “SWAY” because being drunk led Fortunato to his doom. [Independent Credit: LBJMFA | White Raven] Alternately (or perhaps along with) “SWAY” could refer to Montressor’s swaying Fortunato to follow him. [Note: The Poe solution is incomplete] 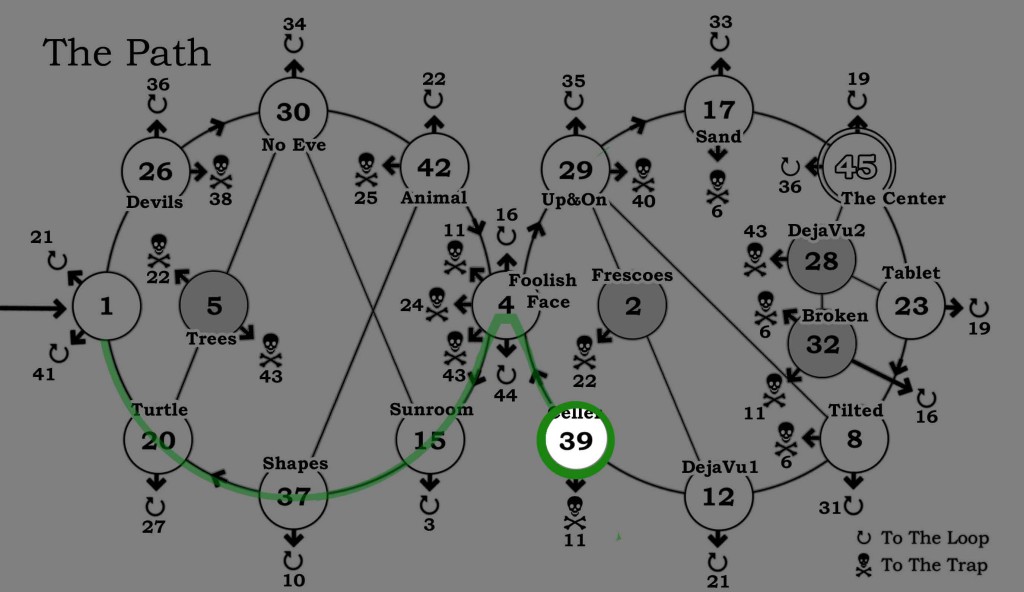